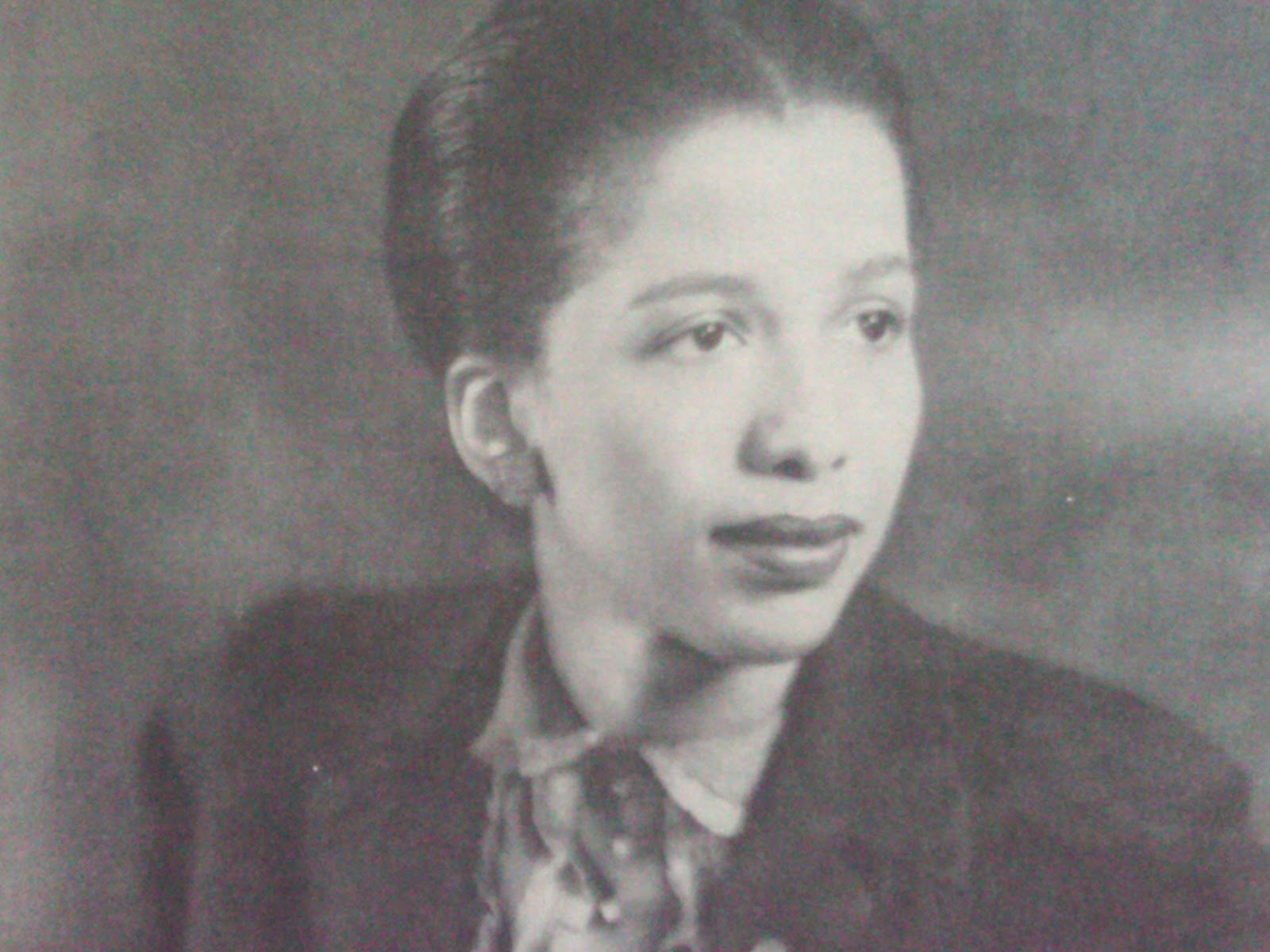 Irene Higginbotham is one of the more elusive characters in the annals of American songwriting. Unfortunately, very little is accurately known of this talented pianist, songwriter and composer. One explanation for Irene's gauzy composite lies in the collection of pseudonyms used in her stead. And, Higginbotham was often confused with another Irene (Kitchings) who also wrote songs for Billie Holiday. As Ted Gioia wrote in his book,  Jazz Standards: A Guide to the Repertoire, “years would pass before anyone tracked down the details to prove they were two separate people.”

What we do know is that Irene Higginbotham was born in  in 1918. Her father was Garnett Higginbotham, Sr. Her mother, possibly Hart Jones, died either in childbirth or shortly thereafter. 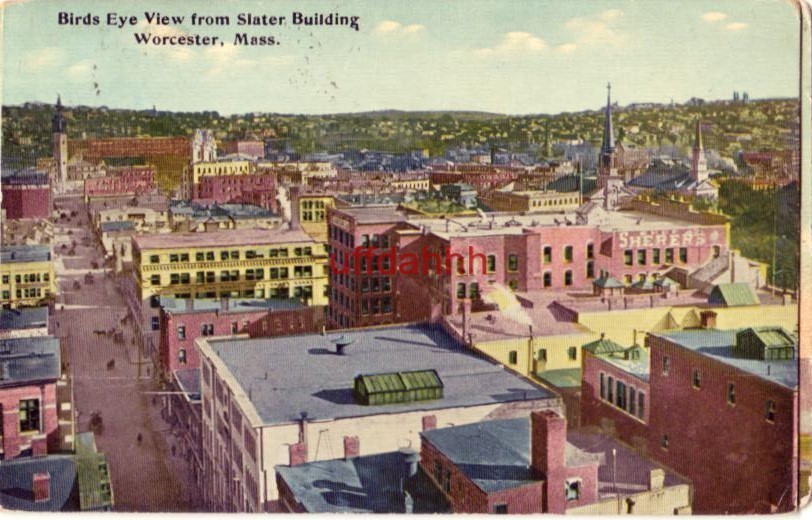 The 1920 US Federal Census finds the Higginbotham family living at  in , . According to the American Society of Composers, Authors and Publishers (ASCAP), young Irene was from “musical parentage.” She started playing piano at five, composed her first song at thirteen, and was a concert pianist at fifteen. She was educated in the famous .

According to the film site IMBd, Higginbotham was later educated at the  (she worked as a stenographer). While in the city, she was a music student of composers Kemper Harold and Frederic Hall. In addition to her songwriting, Higginbotham is the author of chamber music and a variety of orchestral works – mostly authored using the alias, Hart Jones, one of her many pen names.

The 1940 Census found Irene residing at  and was listed as “a songwriter in the publishing industry.” Higginbotham made the most of her stay in the Big Apple. She was both a prolific songwriter and pianist whose talent, although barely recognized, was in great demand among fellow artists. 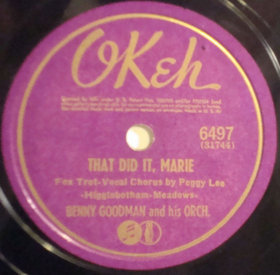 A partial list of those covering her work include: Coleman Hawkins (“Look Out Jack”), Dinah Washington (“Mean and Evil Blues”), Peggy Lee (“That Did It, Marie”), Nat Cole (“This Will Make You Laugh”), Nina Simone (“No Good Man”), Woody Herman  (“I Got News For You”), Louie Jordan (“No Sale”), Charlie Parker (“7th Avenue”), Duke Ellington (“It’s Mad, Mad, Mad”), Charlie Barnet  (“No Pad to be Had”), Wingy Manone (“Shake the Blues Away”), Fats Waller (“Every Man For Himself”), and J.C. Higginbotham (“Harlem Stomp”). By the way, trombonist J.C. Higginbotham was Irene’s uncle. 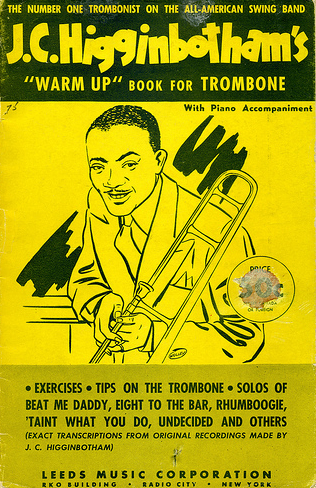 As mentioned, Irene Higginbotham carried a series of names. One of the more confusing is Glenn Gibson. According to All Music Guide the tag was nothing more than a “name on paper.”

“Glenn Gibson shows up as the composer of material in styles such as classic blues, jazz, R&B, and doo-wop in the late '40s and throughout the '50s,” wrote Eugene Chadbourne for the site. “To suggest that the name was larger than life is totally appropriate, since Glenn Gibson represented the publishing interests of more than one person. For awhile, Glenn Gibson was Irene Higginbotham. Around 1954, Glenn Gibson turned into Bertha Knapp, aka Phoebe Snow, Rinky Scott Jones, and Adrienne Garblikand.” 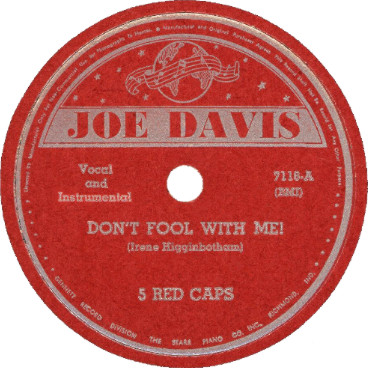 Explaining the reason for such name changing ploys, Chadbourne continues: “Pianist, bandleader, songwriter, and singer Higginbotham became Gibson in order to place material with both competing performing rights societies, ASCAP and . She was under contract to Joe Davis, whose activities in the music business included management, A&R, running record labels, publishing, and songwriting. For , subterfuge with songwriting credits was simply a way of collecting publishing money without revealing whose pocket it was going to. One obvious advantage would be that funds would thus accumulate in a tidy row of smaller pools rather than an enormous one that might be heavily taxed.”

While working with Davis, Higginbotham penned a suitcase full of novelty tunes for Steve Gibson and the Red Caps, a popular R&B act of the 1940s and 1950s, including “Mama Put Your Britches On, “No Fish Today,” “Lenox Ave Jump,” and  “Grand Central Station.” 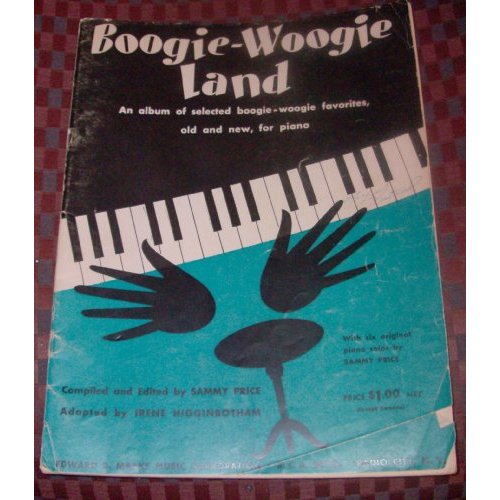 During this time, Higginbotham also contributed songs to the comedy act, Stump and Stumpy. And, given her skill as a composer, Higginbotham was also prevailed upon as a copyist. One of her best known roles in this capacity is her work on the book, , an album of selected boogie-woogie favorites, old and new for the piano compiled and edited by Sammy Price.

Published by Edward B. Marks Music Corporation in 1944, the inscription written beneath Irene Higginbotham’s photograph reads: “The girl who adapted both Sammy Price’s original solos and the Mark’s standard tunes album; she started composing at the age of five and has written more than 1,000 tunes.” 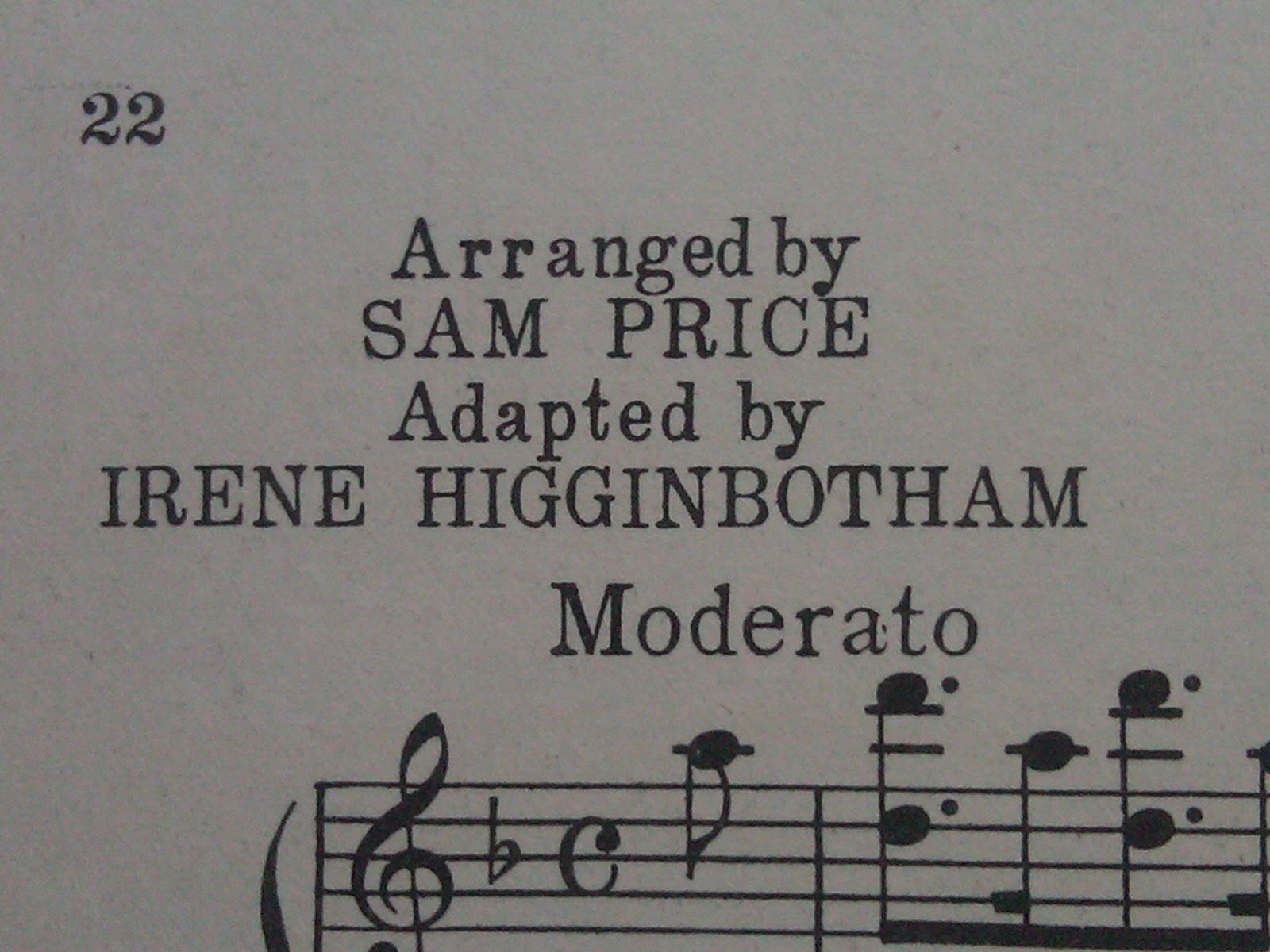 Prolific, yet unsung she remains. Thankfully, there is “Good Morning Heartache.” Gioia correctly deems it one of Billie Holiday’s finest performances. He also notes that “jazz fans have a right to lament that Diana Ross generated far more sales for her imitation of  singing it in the film, Lady Sings the Blues than Lady Day herself.” 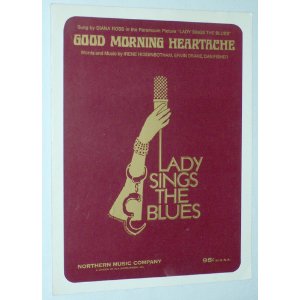 However, jazz musicians were paying attention to . In the years since the release of the film, Gioia reports that the list of jazz artists to cover the song includes Kenny Burrell, Lou Donaldson, Sonny Rollins, Hank Crawford, George Coleman, Houston Person, and Joe Lovano, among many others.

“Good Morning Heartache,” today is recognized as a great American standard that has only increased in popularity and stature since its inception and now serves as an entrance point into the music of Irene Higginbotham and her legacy. 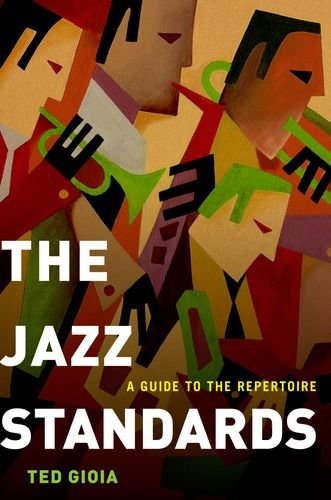 In his book, Jazz Standards: A Guide to the Repertoire Ted Gioia states that is this exquisite song is far better known than its composer. “Given how few women manage to make a mark in the male-dominated songwriting industry during the first half of the twentieth century, and almost total exclusion of African-American women from the field, one would think that curiosity alone would have given some notoriety to Higginbotham’s career,” Gioia wrote.

As he correctly points out, it was first recorded by Billie Holiday, but didn’t make radio charts until covered by Diana Ross in 1973 for the film Lady Sings the Blues.

“Good Morning Heartache was co-authored by Dan Fisher and Ervin Drake. Given the fact that Fisher was a producer, publisher and song-plugger and Drake was a note lyricist, it’s conceivable that Higginbotham was the song’s composer.
Will Friedwald said it was Drake who penned the lyric. “At age 26,” he wrote, “the lyricist was dating a young showgirl named Edith Bein; he already regarded her as the love of his life, but when she began to be courted by ‘all these Wall Street types,’ as he put it, ‘I felt like I couldn't compete, so I just withdrew from her life.’ After they parted, "I couldn't sleep for months; those were what we used to call 'white nights,' where you stay up all night." When he heard a haunting melody by Irene Higginbotham, niece of the trombonist J.C. Higginbotham, ‘it hit me -- smack! This is exactly what I felt when Edith left me. So in about 20 minutes I wrote the whole lyric to 'Good Morning Heartache.'"

Friedwald said that Fisher’s contribution was to bring the song “to the attention of Billie Holiday. The singer insisted on recording it with a string orchestra, for the first time in her career, resulting in a iconic hit. At the record date (in January 1946), Mr. Drake remembers, "I wasn't in the control room -- I was right next to Lady Day. She was standing at the microphone, and I was on a chair, within arm's length. She did it in one take, and it was marvelous."

“Boogie Woogie on a Saturday Night” – performed by the Red Caps
http://www.youtube.com/watch?v=DiEPBv3fYg0 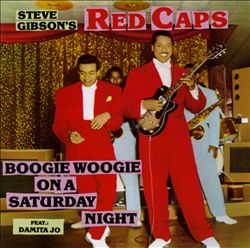 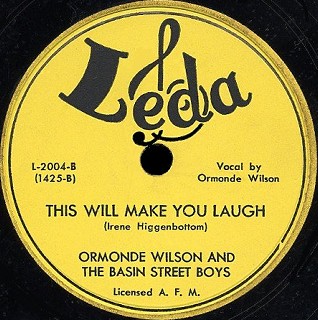 Other songs written by Irene Higginbotham include: “Anna Lucasta,” “Any (Man) Gal At All,” “Are You Livin’ Old Man?” “Big Joe,” “Birmingham Special,” “Blue Enchantment,” “Blue Fingers,” “Blue Violets,” “Blues for Higgie,” “Boogie Woogie Blues,” “Boogie Woogie Land,” “The Caboose,” “Destination Unknown,” “Dream Street,” “Don’t Fool With Me,” “Every Man For Yourself,” “Fair Jenny’s Lament,” “Fat Mama Blues,” “Fat Meat is Good Meat,” “Friends Wonder Why,” “Georgia Gal,” “Get it or Forget it,” “Get Out of the Phone Booth Buster,” 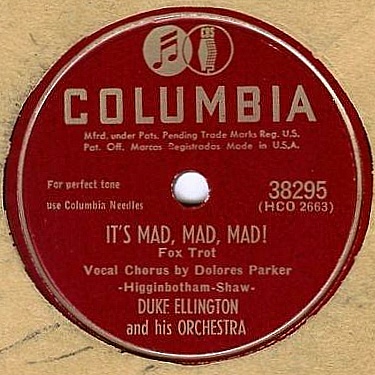 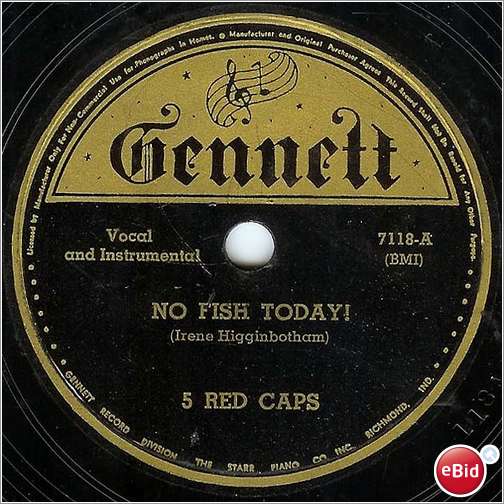 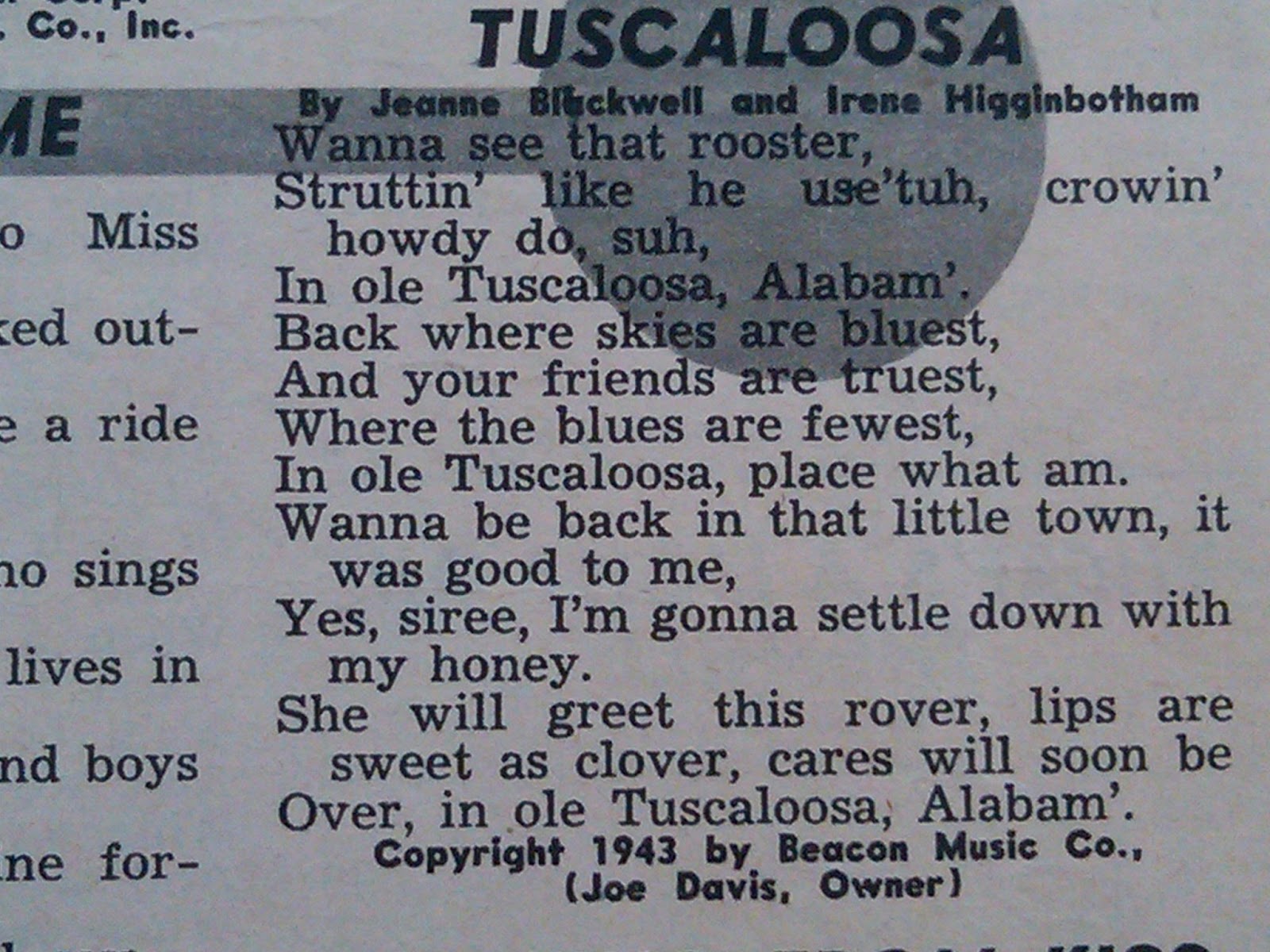 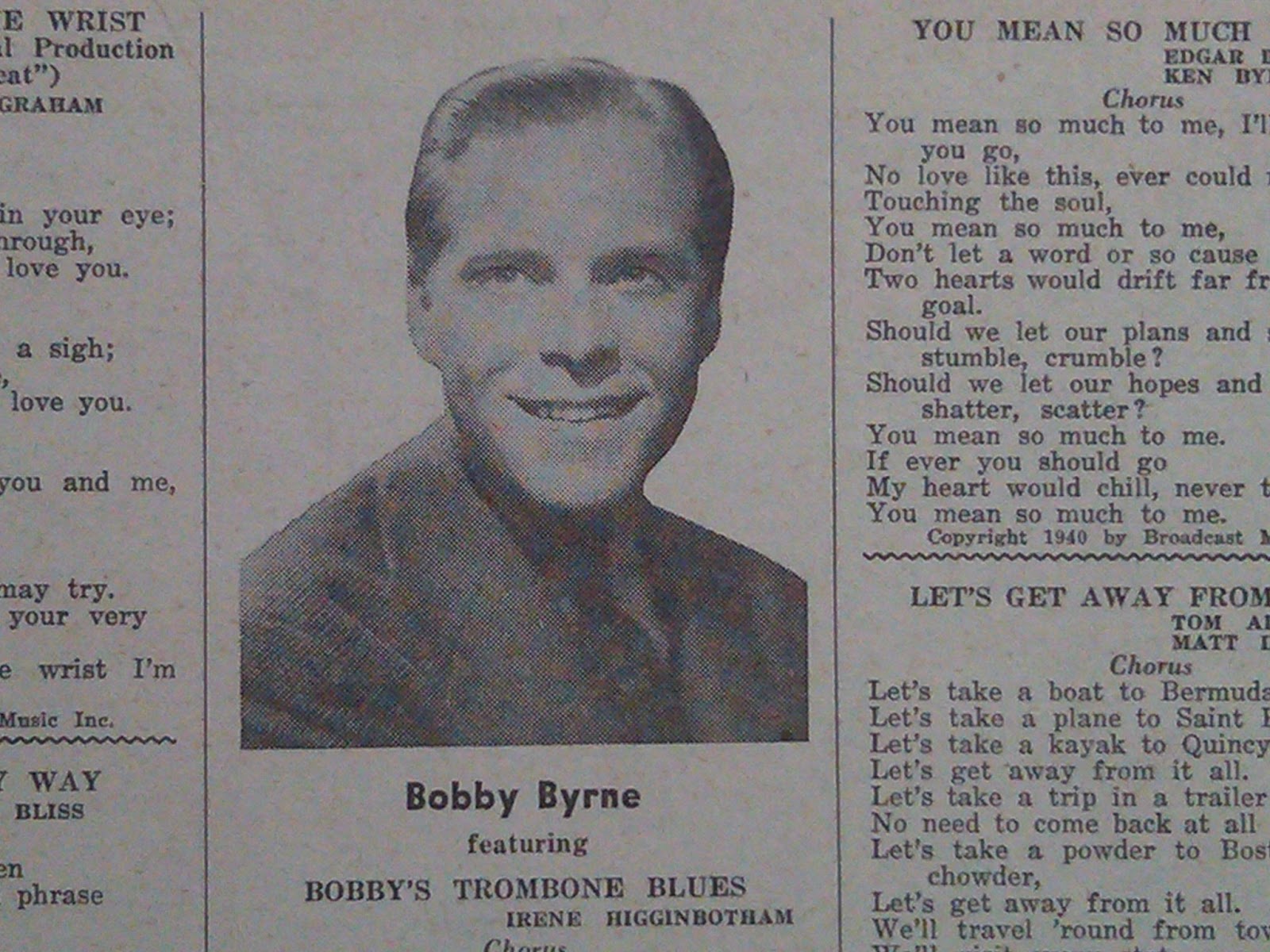 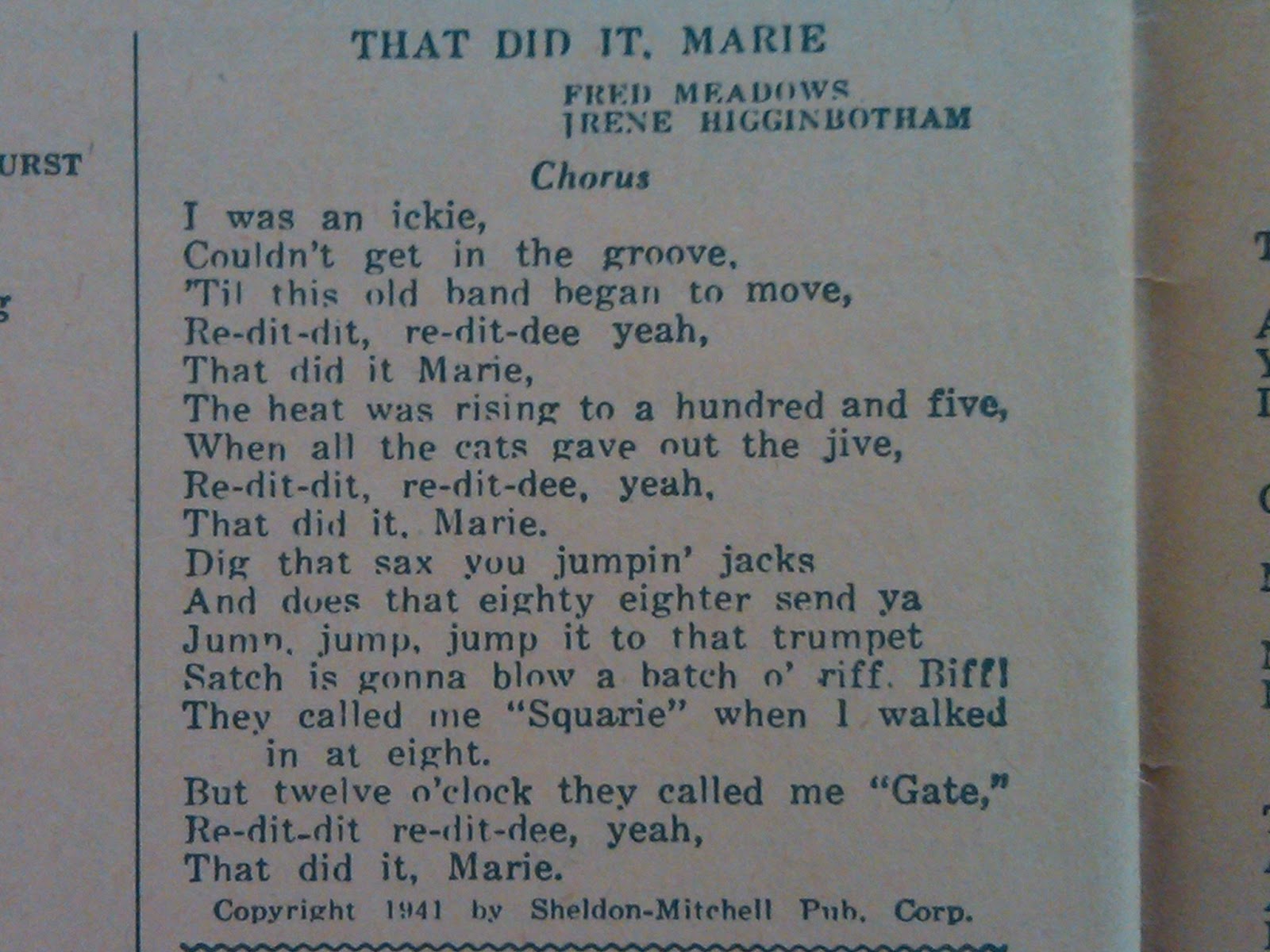 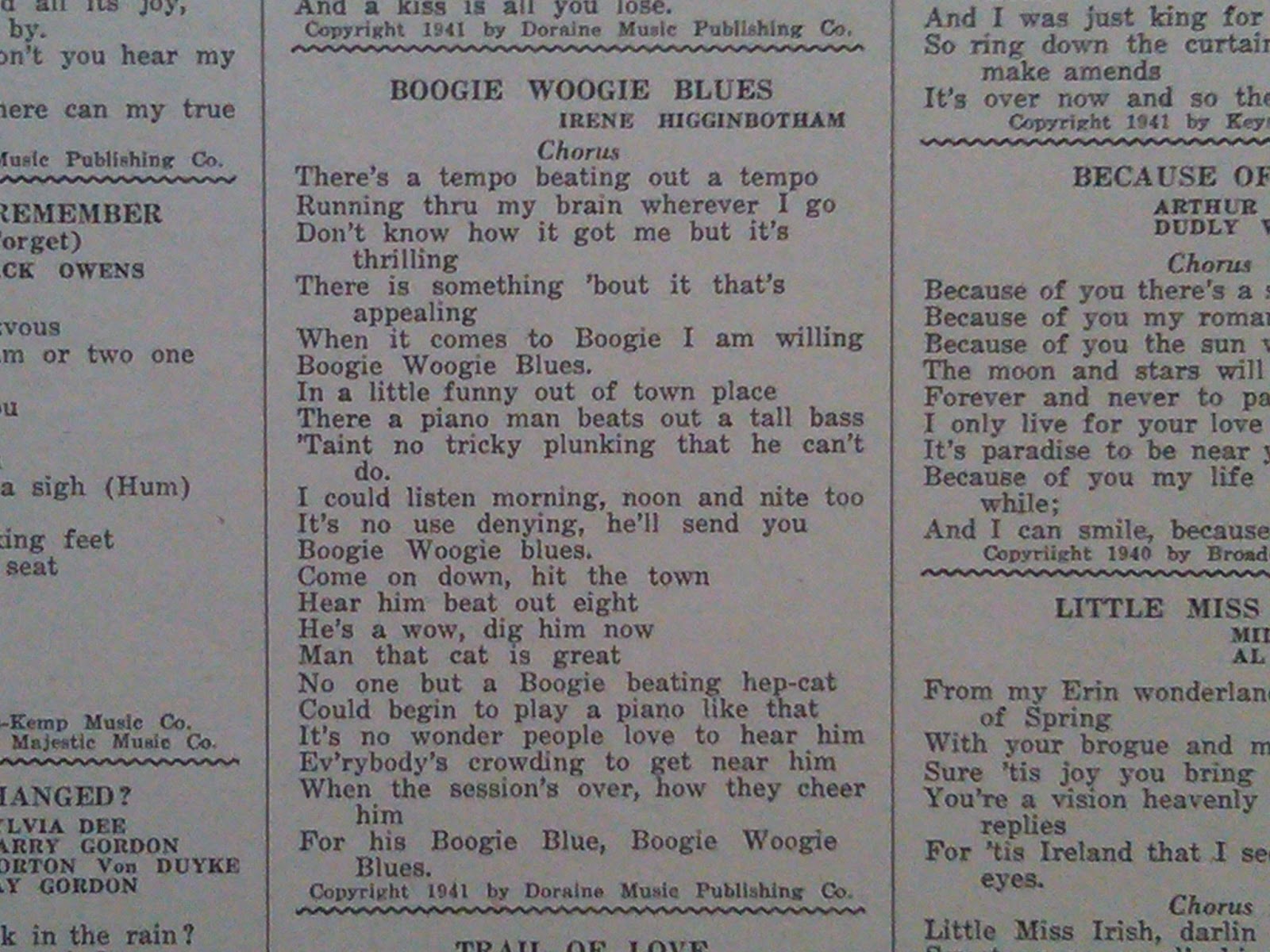 
This is a work in progress. Comments, corrections, and suggestions are always welcome. Write to walnutharmonicas@gmail.com Also see: www.jazzriffing.blogspot.com

See:  Who’s Who of American Women, a biographical dictionary

See: Never Sell a Copyright The Melody Man: Joe Davis and his role in the NY Music Scene

Posted by Chet Williamson at 8:39 AM